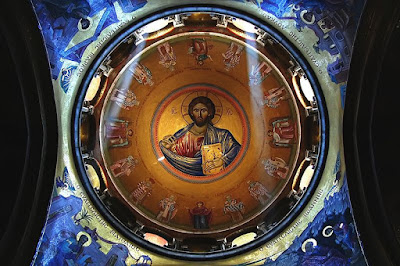 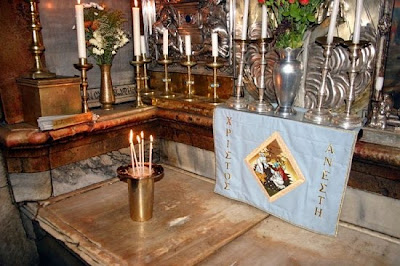 The holiest site in Christianity: the tomb of Christ inside the edicule of the Church of the Holy Sepulchre. This slab is believed to be where Jesus' body was laid in the tomb. The vase of candles marks the place where his head was. The banner behind it varies with the liturgical seasons: this one is after Easter and says "Christ is Risen." 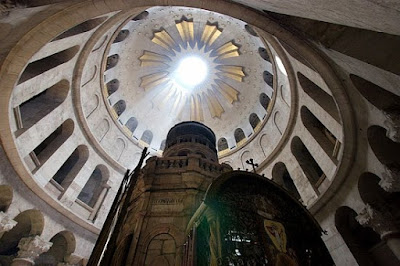 The edicule and large dome over the site of the tomb of Christ, in the Rotunda of the Church of the Holy Sepulchre. The layout and location of the Rotunda has not changed since Constantine built the first church here in the 4th century. 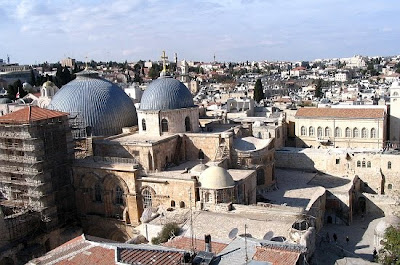 View of the Church of the Holy Sepulchre from the Lutheran Church of the Redeemer. On the left is the Crusader facade and entrance courtyard and the truncated Crusader bell tower. The larger blue dome is directly over the tomb of the Christ; the smaller one is over the Catholicon (Greek Orthodox cathedral). The small white dome is near Calvary. On the far right is the roof, which includes the humble structures of Ethiopian Orthodox monks. The dome just seen on the far right is over the Chapel of St. Helen. 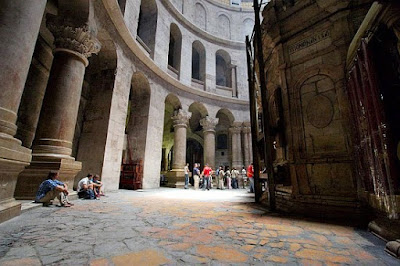 The ambulatory to the northwest of the central edicule (Sepulchre) in the Rotunda. The sunlight comes from an oculus in the large dome above the edicule. 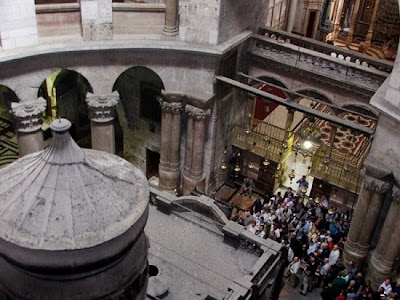 View of the edicule (tomb of Christ) and the Catholicon (Greek Orthodox cathedral) from an upper gallery. 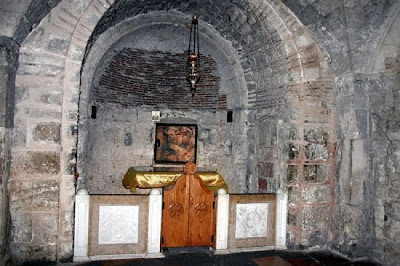 The Chapel of Adam, located directly beneath Calvary and entered via a door near the Stone of Unction. 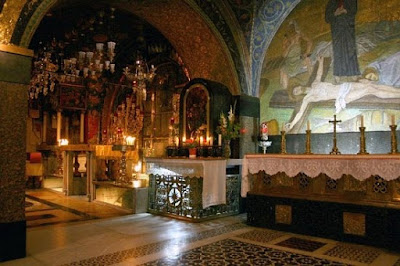 View at the top of the stairs of Calvary or Golgotha, the place where Jesus was crucified. The first chapel (right) is owned by the Catholics and is Station 11 on the Via Dolorosa. Just beyond that (center) is a small statue of Mary, Our Lady of Sorrows, which is Station 13. On the far left is the Greek Orthodox Calvary, which contains the actual Rock of Calvary (Station 12) around which this church was built. 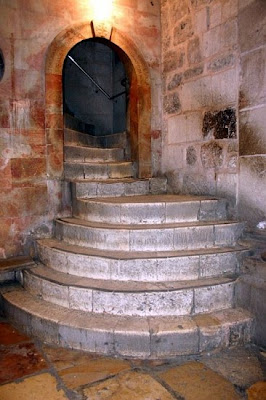 Stairway to Calvary, located on the right just inside the entrance to the Church of the Holy Sepulchre. 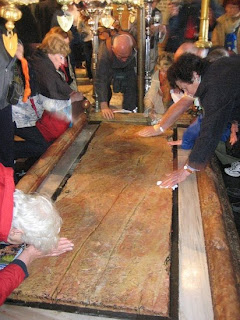 Pilgrims at the stone of unction.
The Church of the Holy Sepulchre, called Church of the Resurrection (Anastasis) by Eastern Christians, is a large Christian church within the Old City of Jerusalem. The ground the church rests on is venerated by many Christians as Golgotha, the Hill of Calvary where the New Testament records that Jesus Christ was crucified. It also contains the place where Jesus was buried (the sepulchre). The church has been an important pilgrimage destination since the 4th century, and the portions of it administered by the Orthodox are in the care of the Church of Jerusalem. The Church commemorates the founding of the Church of the Holy Sepulchre on September 13.
The initial building was founded by Constantine the Great in 335, after he had removed a pagan temple on the site that was possibly the Temple of Aphrodite built by Hadrian. Constantine had sent his mother St. Helen to find the site; during excavations she is said to have discovered the True Cross. The church was built around the excavated hill of the Crucifixion and was actually three connected churches built over the three different holy sites, including a great basilica (the Martyrium visited by the nun Egeria in the 380s), an enclosed colonnaded atrium (the Triportico) built around the traditional Rock of Calvary, and a rotunda, called the Anastasis ("Resurrection"), which contained the remains of the cave that St. Helen and St. Macarius, Patriarch of Jerusalem, had identified with the burial site of Jesus. The surrounding rock was cut away, and the Tomb was encased in a structure called the Edicule (from the Latin aediculum, small building) in the center of the rotunda. The dome of the rotunda was completed by the end of the 4th century. Article continues here.