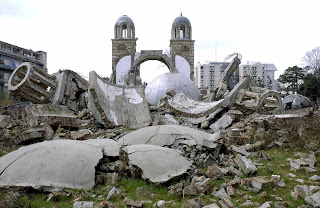 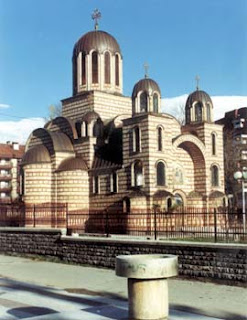 The Cathedral before complete destruction

The Church of the Holy Trinity in Djakovica was completed in 1999 on the foundations of a five-dome memorial church. The previous church on this site was built as a mausoleum for all killed, murdered and frozen soldiers in the wars of 1912-1918. This church was completed in 1940. But in 1949, on St Sava's Day, the memorial church was destroyed by atheists. Fifty years after, the same happened to a new shrine, which was first desecrated, then set ablaze, mined and finally completely destroyed on 24/25 July 1999.
The Djakovica cathedral was one of the most beautiful recently built churches. Several different types of the ground plan were combined in the interior organization of the space. The basic structure was in the form of an inscribed cross. The cathedral had a central dome and four smaller domes in the corner, lower bays. In this way a spiritual connection with the largest church of the SS Archangels Monastery near Prizren, was achieved. Additional side spaces gave to the church the form of a free cross which followed the pattern of the great early Christian churches, especially the churches of St John in Ephesus and the Holy Apostles in Constantinople built by Emperor Justinian. Side apses were added to transversal brackets whereby a continuity with Knez Lazar's medieval architectural style was successfully established.
The architects of the church were Ljubisa Folic and Radomir Folic.
Posted by MC at 12:42 PM